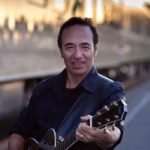 The Mirror Lake Inn presents Steve Wyle. Steve spent much of the 80’s and 90’s traveling the east coast with his band, who opened for such acts as Little Feat and Aztec 2 step. His solo performances show his unique song styling and rhythmic interpretations of classic song writers such as Bob Dylan, Neil Young, and Tom Petty.

Listen to a clip from “Is This All You’re Gonna Leave” below!

Back to Events Posts Summary Page