The perfect time to Ski around Adirondacks

It’s that most wonderful time of the year – when the holiday season intersects with the beginning of the ski and ride season. In looking at conditions around the Adirondacks, we’re looking at a perfect storm.

The season opened last month, but a six-inch snowfall in recent days, coupled with cold temps and snowmaking, is allowing more terrain and trails to open in time for the holiday influx of visitors. Whiteface Mountain hotels are primed and ready, none more so than the AAA Four Diamond Mirror Lake Inn, located just a few steps from Lake Placid’s Main Street. 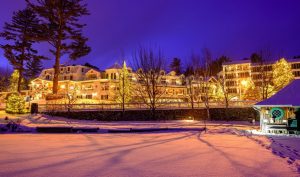 Skiing, snowsports and the Inn are synonymous with North Country winters. The Inn’s winter sports legacy dates back almost 90 years to a time when the resort hosted the entire Norwegian team during the 1932 Winter Olympics. That connection to skiing and the Games also touches the modern era, thanks to the 2010 and 2014 Olympic medals won by Andrew Weibrecht, son of hotel owners Ed and Lisa Weibrecht, that welcome guests upon arrival.

Searching for a unique ski opportunity?

Now that Andrew, a three-time Olympian and inductee into the U.S. Ski and Snowboard Hall of Fame – This link opens in a new browser tab, has retired from competitive skiing, he shares his love of the sport on Whiteface Mountain where he honed his technique alongside brothers Jonathan and Ethan. Andrew regularly guides hotel guests around his home mountain.

Not to be pigeon-holed as just an alpine skiing establishment, the Inn offers Nordic ski opportunities with another Olympian. Andrea Henkel Burke, a native German and wife of four-time U.S. Olympic Biathlon Team member Tim Burke, is available to stride around local cross-country ski complexes with recreational skiers. Henkel Burke – This link opens in a new browser tab won four Olympic medals and eight World Championship titles in a storied biathlon career and will accompany skiers to Mount Van Hoevenberg, the Cascade Ski Touring Center, and the Inn’s sister property, the Whiteface Club and Resort.

In all, the Inn’s luxurious yet unpretentious reputation, lake and mountain views and connection to a sports world that very few can offer, places it arguably at the top of any list of Adirondack ski hotels.